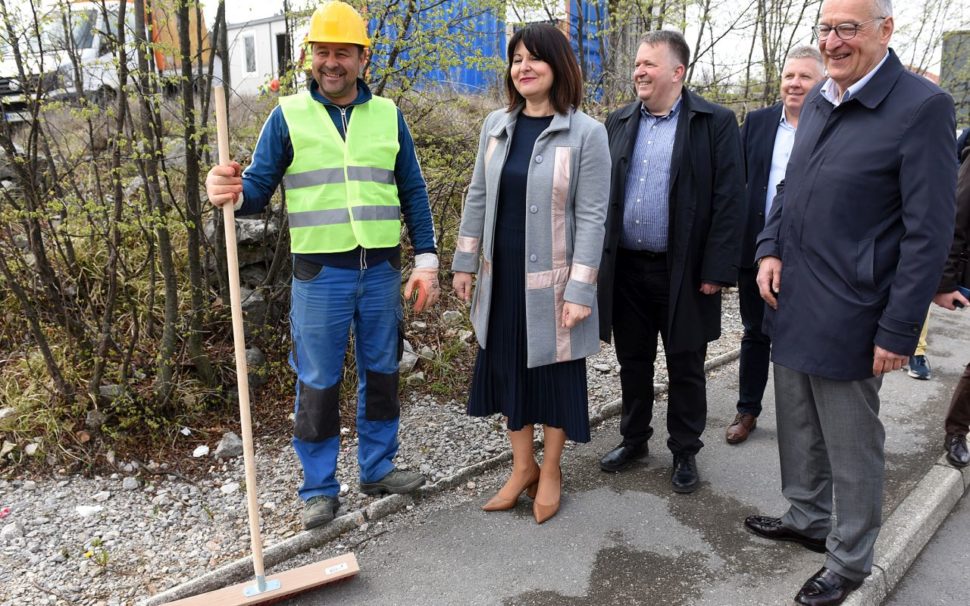 Rijeka, 7 April 2022 – The new stage of operations in the “Improvement of the water communal infrastructure – Rijeka Agglomeration” project co-financed by the European Union from the Cohesion Fund has been announced. The set of works entitled “Viškovo Expansion” will include the construction of a waste water drainage system and water supply system in the area of Viškovo Municipality (the settlement of Marinići) and the City of Rijeka.

The initial works that include the construction of a 2350 metre-long sanitary collector will commence at the Marinići K-1 Work Zone in Marinići Street and will continue in Blažići and Juraši streets. For the duration of the works special traffic regulation will be in force: in Marinići Street, traffic is going to be regulated by traffic lights, and in the streets next to the Work Zone (Juraši and Blažići), traffic will be suspended for all vehicles, while the street in Juraši will be converted from a one-way street to a two-way dead-end street. The works will last for two years.

“It is my pleasure to announce a new step in the implementation of the “Improvement of the water communal infrastructure – Rijeka Agglomeration” project aimed at enhancing the quality of water supply services and increasing the standard of utilities and living for the citizens of Viškovo. We have been preparing for this for a long time and I would like to use this opportunity to ask our citizens for their understanding and to call on them to adapt to the circumstances while the works are being performed. The citizens of the areas where the works will be performed will be timely informed via the media and the project website aglomeracijarijeka.eu, in order to minimise the potential difficulties that might arise in the course of running their daily errands” – emphasised Andrej Marochini, the director of the utility company VODOVOD I KANALIZACIJA d.o.o.

In order to define the position of future sewage and water supply connections in cooperation with the users, the contractor GODINA GRADBENIŠTVO IN DRUGE STORITVE d.o.o. is going to visit the buildings in the streets where the initial works are going to be performed. If the citizens are not home at the time of the Contractor’s visit, they will receive a note with the Contractor’s contact information and proposed times of their next visit.
The set of works entitled “Viškovo Expansion” provides for the construction of a total of 35.7 km of gravity collectors, 28 sewage pumping stations with the accompanying 3.2 km of penstock pipelines and the reconstruction of the public water supply system with a total distance of 18.8 km. The majority of the collected faecal waste water from the area of Viškovo Municipality will be transported through Pehlinska Street via a transport collector that is going to be built in the City of Rijeka.

The contractor is the company GODINA GRADBENIŠTVO IN DRUGE STORITVE d.o.o., while supervision of the construction is going to be carried out by a group of contractors consisting of the following companies: INSTITUT IGH d.d., EPTISA ADRIA d.o.o., FLUM-ING d.o.o. and PROJEKT d.d. Nova Gorica. The total cost of the contracted works is HRK 182 million (VAT excluded) and the deadline for their completion is 65 months.

„This is an exceptionally significant project for the citizens and businesses of Viškovo, reflected in the fact that HRK 230 million are going to be invested in Viškovo as part of the project. More than 20 kilometres of water supply network and just under 40 kilometres of sewage network are going to be built, which will reduce the direct discharge of unfiltered waste water into karst soil and have a positive impact on the environment. It should be noted at this point that, within the scope of the project, citizens will be able to dispose of waste water through the new utility infrastructure, which will increase their quality of life. This is the biggest investment into the utility system since the founding of the Municipality and, apart from building a sewage system, its realisation will ensure the highest standards in terms of quantity and quality of water for use and protection against fires. This historic investment into the water and utility infrastructure will lay the foundations for a stable and ongoing development of Viškovo in every aspect. It is by far the largest and most complex project in the area of Viškovo, both in terms of finance, operation and construction, since demanding works are going to be performed in the majority of settlements in Viškovo, which will require plenty of understanding and patience from all of us. I am using this opportunity to thank the utility company Vodovod i kanalizacija d.o.o. Rijeka for our long-term successful cooperation in building a whole array of water supply branches and water system infrastructure facilities in the area of Viškovo and I hope that this cooperation will continue into the realisation of this very challenging and long-lasting project” – said Sanja Udović, Mayor of the Municipality of Viškovo.

Information for the media – PDF